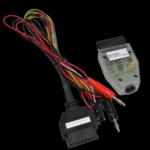 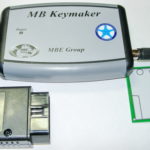 NEC v.10.60 is a basic, start package for Mercedes-Benz key programming. Although it’s just a first step in Mercedes-Benz programming it has huge possibilities and allows to not only read/ erase/ program keys in cars but also do basic diagnostics on keys (like with the use of MB Key Expert).
By using the NEC PCB (included in the set), you may erase and program NEC processors, which are used in the new-type keys – small shape. Having the processor erased and soldered back you get a preprogrammed key which you may program later by our programmer via IR channel.
You may also program the old-type key (black big shape) via IR channel if you erase the Motorola processor beforehand by using an appropriate programmer (for example our EEPROM Programmer).
You can easily upgrade your tool with extra features.

NEC Processors
The programmer works on NEC Processor keys in two ways:
Type 1. PCB – Soldering of the removed (soldered off) key processor on a special motherboard (included in the set)
Type2. Via IR (INFRA RED) Port when the key is not disassembled but inserted into the IR-port

No products in the cart.